A ventriculoperitoneal (VP) shunt is a medical device that is implanted by a neurosurgeon to treat hydrocephalus and drain excess cerebrospinal fluid (CSF) when the brain ventricles have accumulated too much, potentially causing pressure on the brain. It sits below the skin behind the ear, with one tube gathering CSF from the brain and another tube draining the CSF down into the abdomen, where it is reabsorbed by the body.

Kiara’s vision continued to worsen, so the hypothesis was that there may be increased ICP on her optic nerves. Even though she already had a successful ETV, her neurosurgeon implanted a v/p shunt so that we could be assured that her brain was not a “crock pot of pressure” that could cause her further problems down the line. Although we had been professional shunt-dodgers for a year, we finally consented to the device. Her shunt was manufactured by Certas and it is programmable. 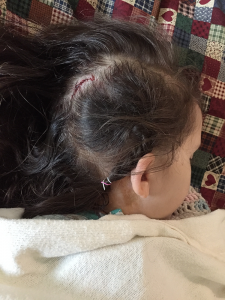